an invitation to advance your soul

Amazon:  After the Interlude 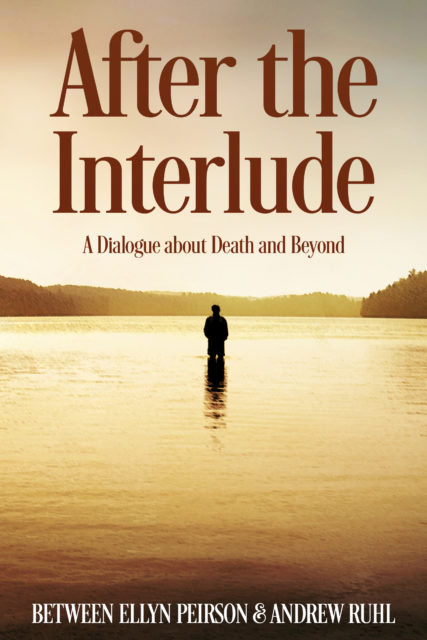 After the Interlude is highly personal and yet it will touch readers in their personal beliefs and fears. With references to the Platonic philosophers, Julian of Norwich, Emily Dickinson, William Blake, C. S. Lewis, Annie Dillard, Mary Oliver and Chet Raymo, the argument that the purpose of life is the advancement of the soul is brought home. And it’s brought home with an openness that allows the reader to try it on for size, rather than insisting on adoption or rejection.

And, above all, After The Interlude faces death head-on. Ellyn Peirson’s credo on the soul’s journey is a personal culmination of years of exploration of the soul. Andrew Ruhl, Ellyn’s soul-friend, responds to and frames the theories and propositions in words and photography.

It all began simply enough. The question was rather ordinary. Margaret, Ellyn’s only sibling and soul-companion of longest standing, had just died. Andrew, in his fourth post-bone-marrow-transplant year, wondered via email what the experience of Margaret’s actual death—her process of leave-taking—had revealed to Ellyn. Because of their familiar journey into the territory of Andrew’s leukemia, its treatments and effects, Andrew and Ellyn communicated easily about such matters.

“What was her death like?” Andrew wondered.
“What did you see and understand?”

Simple enough… but in the paradoxical way that life and death can shift paradigms and relationships, the question became a holy grail. Pondering, strategizing, mentally rehearsing, Ellyn spent two months traipsing the question’s circumference. How does one begin to give words to the sanctity of grief and gratitude, to the observation of a death, to the exit of a huge soul? This critical task seemed to be a beginning without a beginning.