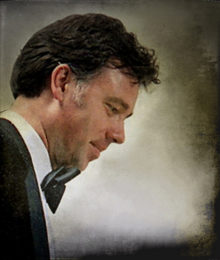 …Glenn was best known for
his outrageous sense of humour,
his brilliant mind,
his massive knowledge of music,
his far-reaching compassion,
and his profound love for his family…

Glenn Peirson walked boldly and compassionately in this world, blazing new pathways, dreaming new dreams into being, and maintaining beautiful relationships. The complications of cancer treatment suddenly claimed him after a three year heroic battle. His deepest devotion was to his God and his family: his exceptional soul-mate, Dr. Mary Peirson; his twelve year old daughter, Theodora; and his nine year old son, Henry.

Glenn was born in Kingston, Ontario, and raised in Guelph. He was a scholar, athlete, musician, spiritual giant, poet, gardener and great lover of the Land of Narnia. As a boy soprano chorister, he became head chorister at St. George’s Anglican Church in Guelph. He was selected for the Ontario Youth Choir when he was in Centennial CVI, Guelph. He played for the school basketball and football teams, while he breezed through his studies.

Glenn was admitted early on scholarship to the University of Guelph, where he undertook studies in Philosophy and Science. During this time he was tenor soloist at Metropolitan United Church in Toronto. He received research grants, in particular, an NSERC grant in brain laterality and music. He was the Winegard Medalist at his convocation.

Glenn went immediately from his studies to McMaster Medical School. In the entire period of medical school and residency, he sang with the celebrated Tafelmusik Baroque Orchestra’s Chamber Choir, Toronto. Glenn also created practicums that took him to Moose Factory and further north, to Kapsowar in Kenya, and to St. Oswald’s Hospice in Newcastle-upon-Tyne in England. It was in his residency at McMaster that he met and fell in love with Mary Beingessner, who had studied medicine at the University of Toronto. What he initially loved most about Mary was that she carried a book of poetry with her in the hospital. They married December 8, 1991, in their final year of residency and while Glenn was Chief Resident.

Glenn and Mary moved to Guelph in 1994. Mary found her career in public health medicine. Glenn worked as a palliative care physician and was key in setting up the program at the Guelph General Hospital. He went on from there to a community health practice centre and then established a private practice in Cambridge, near Guelph. He was also the Addictions physician at Stonehenge Treatment Centre. Glenn has been a vital member of Dublin Street United Church in Guelph, a founding member of Tactus Vocal Ensemble, and a wine and spa writer for North American Inns magazine. Finding and encouraging musical gifts in children has been a great joy for Glenn. His children have participated abundantly in the Guelph Youth Singers, the Kiwanis Festival and the Southern Ontario Suzuki Institute’s summer program at Laurier University.

Glenn is survived by his wife, Mary; his children, Theodora and Henry; his parents, Ellyn and Doug; his sister, Rebecca Peirson; his sister, Monica and David Durbin; his brother, Adrian; Mary’s parents, Jim and Sandy Beingessner, Mary’s sisters, Laura and Dimas de Campos, Jane and John Watson, Sara and Richard Kaune, and brother Paul and Sarah Beingessner. Glenn’s adoring nieces and nephews will miss his teasing and great love: Lukas, Oskar and Max Kaune; Thomas, Hugh and Blythe Watson; Emilio de Campos; Benjamin and Claudia Durbin. Glenn is also survived by his aunt and uncle, Ron and Ann Peirson, and his cousins, Kent and Stephen and their families, all in Kingston.

I'm passionate about poetry and the depth of ongoing discoveries of truth, beauty and goodness. I work out my personal evolutionary position on these ideals through science (mostly physics), writing and photography. I anchor them in my faith, relationships and music. I enter this sacred ground, as needed and desired, through silence.